Adepticon 2014 was held at the Westin hotel in Lombard, IL (a suburb of Chicago) this weekend.  They great team running things there had 20 tables all set up with terrain, ready for Infinity gaming – and they still had more terrain in tubs underneath the tables! While no single event reached the 40 players that they were prepared for, they saw a lot of action all weekend long.

The Demo table was going non-stop with new players trying out Infinity for the first time using the army lists from the Quick Start rules, on a great table of Warsenal terrain.  There was a major Infinity Tournament each day.  Thursday night was a Spec Ops Campaign event, where you built your Spec Ops model after each round with the Objective Points you achieved.  Friday was a Joint Operation team tournament during the day, followed by a 400-point Annihilation tournament that night.  All day Saturday was the Grand Tournament, and Sunday was a special event using spec-ops models to escape a Morat prison.

Tom from MayaCast won the Spec Ops campaign tournament on Thursday with his Tohaa, and then teamed up with J from Warsenal for the Joint Operations tournament, where their Team Tohaa 10 took the top prize. 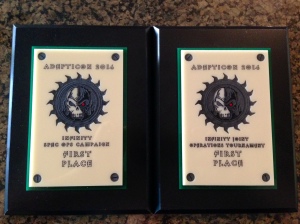 Tom then entered those same Tohaa into the Crystal Brush on Saturday, rather than play in the Grand Tournament.  They ended up walking away with the top prize in Sci-Fi Squad as well!

In addition to the Tohaa, Asuka Kisaragi also earned a Bronze Crystal Brush in the Sci Fi Vehicle category.

Friend of the Podcast Guillermo (you may know him as the legendary “Magno”) also scored a Crystal Brush for his Nomads, “Team Creamsicle. 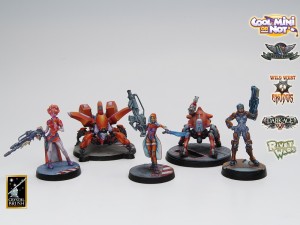 The weekend ended with a bang Saturday night when Kip’s Aleph Steel Phalanx faced off against Bill from Warsenal, playing Kip’s Caledonians.  The Myrmidon Hacker killed seven Caledonians, making 9 armor saves along the way!  It seemed that every time Bill would roll a Crit, Kip would out-crit him!  It happened twice, once when Bill had rolled TWO crits, and again on the last roll of the game.  Entertaining stuff!