Kuang Shi was the name zombies received in the South of China, those that had a soulless body. Currently, the Kuang Shi are something similar, political prisoners or recurring offenders, those who disappear in the dungeons of the Celestial Guard, those who have be subjected to deep brainwashing leaving them reduced to mere human shells that only know how to repeat Ministry of Information propaganda.

The Kuang Shi have been condemned to a postponed, but useful to the system, death sentence. Judiciary specialists convert them into resolute soldiers capable of sacrificing their lives for who they used to hate the most: the Emperor. Thus, the Son of Heaven gives them the chance to become loyal subjects by giving up their lives in order to redeem their error.

After the period of “political indoctrination” and instruction, they are loaded with incendiary explosives, given a cheap Chain Rifle, and assigned a target. The explosive package they come equipped with has a remote activation device. The Celestial Guard in charge of monitoring them also carries a remote control device that allows them to detonate them whenever they want. If the soldier falls the explosives detonate automatically. If the Kuang Shi disband or retreat the detonation device activates as well. 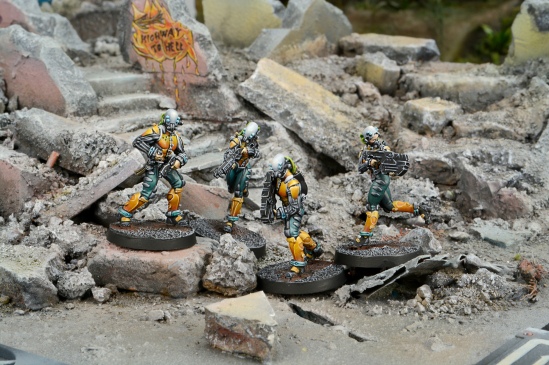 It is easy to suppose that, generally speaking, these individuals never survive their missions. However, the death of a Kuang Shi tends to be a motive of happiness for the other Yu Jing troops because not only does it mean that there is one less traitor, but that by disappearing he will have eliminated a good number of enemies as well.